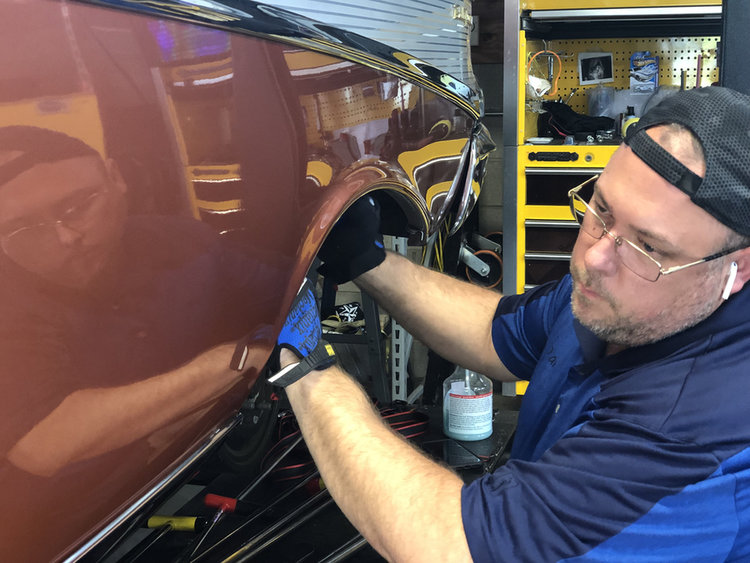 Hailing from Rochester, New York, Dan Rechichi, the owner of the Dent Guy, has been performing Paintless Dent Repair since 2011. Before owning this company, Dan was an auto-body technologist for twenty years so he has plenty of experience in the automobile industry. He describes paintless dent repair as the process of removing dents, dings, hail damage, and minor collision dents from a car’s body as long as the paint hasn’t shifted from any of these dents.

The Paintless Dent Repair that Dan performs uses special tools like hot glue and tables along with specially bent rods that help him manipulate the metal back to its original shape. The method of Paintless Dent Repair that uses glue is termed glue pull repair. As the name suggests, the work is paintless and non-invasive, which means he doesn’t use any extra paint or extra filler to repair the panels. He just shapes and bends the metal in a way that helps the dent pop right out.

Dan started his own company performing Paintless Dent Repair because it helped him provide consumers with an alternative method to dent repair compared to other body shops. He prides his auto shop in being able to turn around the car faster, which means that it looks good as new in a short period. The Dent Guy says that, with this method of Dent Repair, i.e., PDR, you would be able to retain the value of the vehicle. This fact means that you don’t have to worry about losing any money due to a minor dent or ding. Much of the reason that this method helps in value retention is that it is paintless and no extra filler or paint will be applied to the body of the vehicle.

Dan also claims that PDR sometimes helps customers save money; it’s a smooth process for him, considering how much experience he has. He saves his clients’ money by not using any extra material or filler and not cutting the panels or replacing them, saving you money in using this method. His level of expertise enables him to ensure that the work he or his fellow technicians do on your vehicle gets completed in record time so you and your car can be back the road as soon as possible.

Dan and the many certified technicians at The Dent Guy want to provide the best service possible for you. Owning and fixing cars can be an arduous task. So, the best you can do is leave the hard work to the professionals, and we’ll fix your car right up. If you still don’t believe us, come down to our shop in Rochester, New York, and meet Dan yourself.

For more information on Dan Rechichi, the Dent Guy, or Paintless Dent Repair, contact us at www.thedentguy.com or get a quote at 585-721-6945 today.